Its In Our Hands

If you’re a Berner and feel like the Democratic Primaries were a hoax a fake mirage of hope on the horizon shattered by corruption and that imaginary thumb pushing the scale in Hillary Clinton’s favor making young voters feel as if their voice has been stripped from them. Jill Stein has fought for our rights before many of us could even walk. During the DNC walkout who was outside with us? Jill Stein was because Jill Stein is for the people and always has been about making our voices heard. As Berner’s we brought Bernie Sanders from polling at 1% to getting 43% of the vote  even though the deck was stacked against us the entire time. Revolutions don’t begin because everything is all peaches and roses, revolutions begin when people become fed up with stagnant wages that breed poverty why the rich bask in luxury of tax breaks that my friends is what starts a revolution, a Political Revolution. As Berners we were never ever given a voice through no fault of Mr. Sanders who vehemently fought for us during this primary. If you are a Hillary Supporter really ask yourself why does everyone say we’re with her? Shouldn’t her tagline in some way represent your voice? 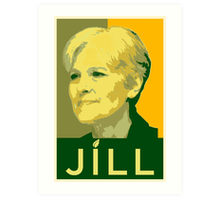 Political Revolutions don’t just stop because someone or something gets in their way, Hillary Clinton winning the nomination doesn’t put the embers out in this revolution. Bernie Sanders simply ignited us it is now our job to make sure that the revolution continues. Show the Democratic Party that your vote and your rights are not to be tampered with and join The Green Party lets continue this revolution. Join us on August 4th for the Green Party’s National Convention show up and show the higher echelons of the political establishment that The Green Party is here and we mean business. Switch your party affiliation to The Green Party join the Green Revolution, petition in your state to get Jill Stein on the ballot, voice out your opinion about allowing third-party candidates into the national debates and together we will dethrone the political elites giving the American people back their voices Because both presumptive nominees for both major parties 60% of the people in this country disapprove of, why would we  nominate any candidate for any office who has a high disapproval rating is beyond our scope of research never mind someone running for president of the United States.

We aren’t sure about any of you but as far as we’re concerned we will not allow our votes to be dictated or controlled by nerdy staffers at the DNC who apparently cant tell a Trojan virus from their asses. If you feel the same way then join the Green Revolution  take back what has been taken from us, when has corruption and greed ever silence a revolution? It never has, because corruption and greed are the wind to our fires. The WEDA Coalition wholeheartedly implores all members who feel the same to join this revolution so we can ascertain what has been lost to us. #OpJillStein is now in effect, much like #OpBern where we focused on drawing crowds to events #OpJillStein must focus on getting her name on ballot in states in which she is not already on the ballot then we can focus on the debates and drawing huge crowds to Green Party events. If you would like to join our Green Revolution then go to http://www.jill2016.com/ if you would like to get involved in #OpJillStein then contact @theriverkid413 who handles media relations for The WEDA Coalition or you can Direct Message our twitter page @Dapeaple and we will get you started right away, this is our Country, our Revolution and #ItsInOurHands.

Search your state and find out what you can do to get Jill Steins name on the ballot in your state, if you have any questions about state ballot access laws you can also contact us @dapeaple and we will research it for you and get down to the bottom of it.

Indiana (Indiana voters will be able to write in Jill Stein for president.) 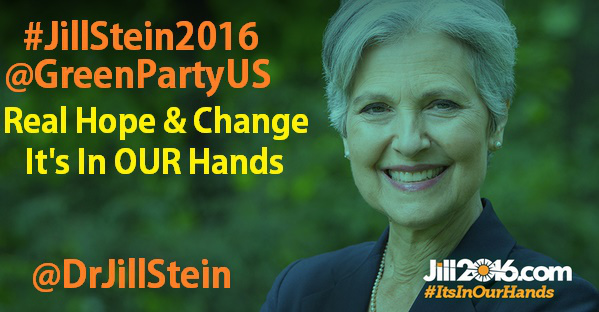 We hope America is ready! The Green Revolution is upon us…expect it😊 #ItsInOurHands

One thought on “Its In Our Hands”