The Houthis rebels in Yemen claimed responsibility for the attack in an announcement that aired on the Houthi’s Al-Masirah satellite news channel. Claims by Secretary of State Mike Pompeo, talking heads in media, and the government of Saudi Arabia that Iran is responsible for the drone attacks at Saudi Aramco or that the Houthis do not have the capabilities to carry out this attack are utterly false. According to the United Nations, the Houthis in Yemen have UAV-X drones with a range of over 930 miles which would put Saudi Arabia and the UAE in range of Houthi drone capabilities. Not only have the Houthis claimed responsibility for the attack on Saudi Aramco, but they have stated their motive for doing so very clearly. The Houthis attack on Saudi Aramco was in direct response to the Saudis four-year-long bombardment of Yemen, which has killed over 90,000 people with civilians being targeted 67% of the time according to data released by ACLED. A military spokesman for the Houthis Yahia Sarie stated on Houthi’s Al-Masirah satellite news that the attacks would continue unless Saudi Arabia stopped bombing Yemen 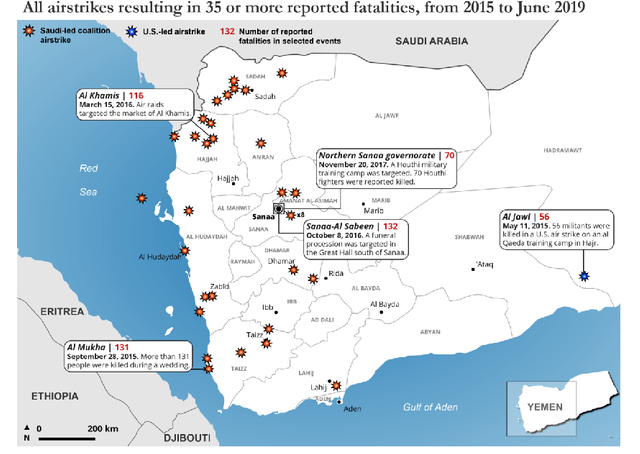 Even before the fires were put out at Saudi Aramco Secretary of State Mike Pompeo was blaming Iran. The Saudi’s were still investigating who committed the attacks, but at this point, if the Saudi officials didn’t come out publically and also point the finger at Iran for the attacks, then they would have been disagreeing with the United Kingdom. France, and Germany all parrotted the claim by the United States that Iran was responsible. Their evidence that Iran is responsible is because the drones were allegedly Iranian made, but wouldn’t that make the United States responsible for the missile attack on a school bus in Yemen that killed 50 children heading to summer camp since that missile was American made? The United States, France, Germany, and the UK are all complicit in creating the worst man-made humanitarian crisis in the world because each one of these nations has negligently been selling arms to Saudi Arabia a country committing war crimes daily in Yemen. The international community cannot fathom that the Yemeni Houthi Rebels threw a giant stick into the spokes of the PetroDollar, that one of the poorest nations in the world blew holes in the pockets of the richest nations in the world because this is a frightening reality to global powers, the poor attacking the rich?! That is terrifying! Thus they have to create their own reality that is both politically and economically beneficial to them, Iran did it. Narratives pushed by talking heads in media and the international community want you to believe that the Houthis aren’t smart enough to pull this attack off, they want you to think that they are a poor and uneducated people just like the people of every other country we have brought “democracy” to in the last fifty years. Yemen is a sovereign nation and has every right under international law to retaliate when their country has been under siege for over four years. The people of Yemen support the Houthi Rebels, the Prime Minister of Yemen recently spoke at the United Nations and thanked Saudi Arabia for “all they have done for Yemen,” he is not elected, he was appointed by Saudi Arabia and does not support the views of the people of Yemen. There are over 22 million in desperate need of humanitarian aid in Yemen, but this is not the leading story on every media outlet across the globe. Eighty-five thousand innocent children under five years old have already starved to death in this war, but this is not a story. Saudi Arabia targeted civilians in Yemen with airstrikes over 4,500 times since 2015 and again unsurprisingly this is not a story, but destabilizing the PetroDollar now that is international news.